A bicycle tour in Lublin

A bicycle tour in Lublin

An attractive, dynamic form of sightseeing. It allows you to get to know the city from an unusual perspective and access more interesting places. It ensures close contact with what is happening in Lublin here and now, not only with monuments and museums. It allows you to reach less frequently promoted objects, as well as interesting ones such as widely open attractions. We also use all the advantages of cycling – the joy of life, movement, freedom, purchase, dynamics, financial availability, integration. When we want to stop over – we fasten the bike to a nearby stand and go where we want.

The basis of the trip is the nearly 12-kilometer ring around Downtown and the Old Town. We start at Wolność Square, then we go along Żmigród and Królewska streets, then Lubartowska and Podzamcza streets. We traverse the valley of Czechówka and Bystrzyca, driving along the avenues: Tysiąclecia, Unii Lubelskiej, and Lubelskiego Lipca 1980, and along Muzyczna street. We get to know the areas around the Academic Campus and the Saski Garden. Finally, going along Krakowskie Przedmieście, we reach Litewski Square.

We get to know the basic historical atmosphere of the city – we reach the oldest monuments and discuss the changes that took place in the city’s landscape in the 20th century. At the same time, we are looking for accents that build the current climate – for example, new elements of downtown and non-downtown architecture and urban planning, bicycle transport solutions, current social and cultural events, a trail of local murals, and elements of alternative trends in urban life.

We also propose an extended option, which allows you to get to know other faces of the metropolis in more detail – we travel along additional routes, a few kilometers from the center of Lublin. Besides, an important feature of Bicycle Tours is flexibility and the so-called flanering. In addition to permanent and unchanging elements, part of the route can be run according to the tastes, needs, and individual interests of group members, including periodic and unusual tourist attractions. The guide, to the best of his abilities and knowledge, will modify the course of the walk.

For those who don’t have their bikes or in the case of a vehicle breakdown, the organizer provides the use of the Lublin City Bike system on preferential terms. 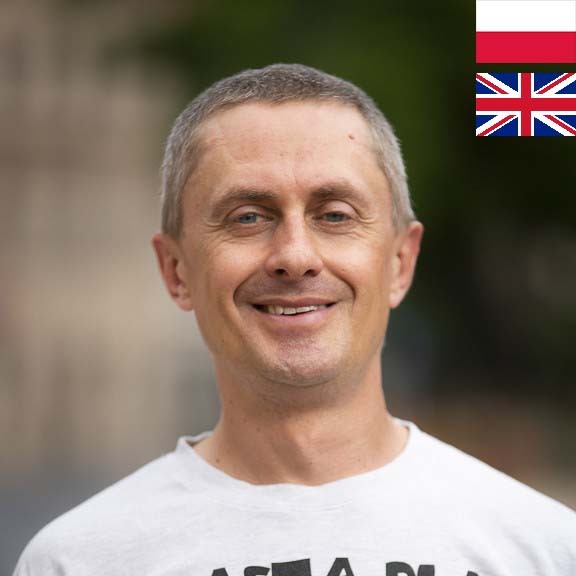 I was born and live in Lublin. I am a graduate of the 3rd High School Unii Lubelskiej and the Faculty of Humanities of the Catholic University of Lublin. I worked in marketing companies and as a trader in Warsaw and Lublin. Currently, I am developing social projects as part of the “Society for Nature and Man”, mainly in the Bicycle Agreement group. In the local and industry press, I publish texts in the field of urban, social and cultural journalism. On social networks I run literary profiles and profiles concerning urban space as well as cycling and walking. I support the activities of local groups sensitive to the subject of cultural space. My interests include contemporary literature, Zen gardens and haiku poetry.

I passionately explore city alleys and often organize bicycle trips — along the streets and shortcuts of the city and suburban transport network. I co-created the Lublin Bicycle Infrastructure Map and animate activities such as “Social Cargo Rental”, “Lublin Critical Mass”, “Lublin by bike”.