The squares of Lublin - where the city's energy emanates the most

The squares of Lublin - where the city's energy emanates the most

The walk aims at showing the participants the most important places where life in old Lublin went on in a cumulative way. Currently, besides being a place of the residents’ meetings, these are the areas used for some cultural events. The history of selected squares will be told. Attention will be paid to existing and non-existing buildings that marked the layout of the squares or gave them characteristic features. A place primarily owes its atmosphere to the presence of people, and the events associated with them. In the squares people from various social groups met, a trade took place, people participated in demonstrations or holy masses, they experienced joy and tragedies of life.

The walk will start in the Zamkowy Square (Castle Square) (former the People’s Gathering Square). The presence and activity of the Jewish community in this place will be described (the non-existent Szeroka street, the synagogues, the house of the Seer of Lublin). The next place will be the Po Farze Square where a group of monuments will be briefly described (the non-existent church of Michael the Archangel, the house of the Vicars, the tenement house from which a fire spread in 1575 destroying the entire Gothic Lublin). Then, the participants will go to the Rybny Square (Fish Square) where in the Middle Ages the fish from nearby Czechówka river were sold and where an executioner’s house and a bawdy house were located.

The next point of the program will be the former market square with the Crown Tribunal. The most important monuments and the most beautiful tenement houses (Lubomelski’s and Konopnic’s tenement) will be described. Then, the participants will go to the Cathedral Square where in the 19th century there were still the Jesuit buildings. Here, people who attended the holy masses met, often in large numbers, especially after the miracle of July 3, 1949 when the painting of Our Lady in the cathedral cried with bloody tears. At the nearby Łokietek Square (formerly Korce) the attention of participants will be paid to the Krakow Gate and an area in front of it where a market square used to be. Then, we will go to the Wolność Square (Liberty Square) with the old water supply facilities. The last stop of the walk will be the Litewski Square (Lithuanian Square) with the numerous monuments around it. It used to be the Square of Military Drill where the Russian army paraded in the Period of Partitions; during the occupation it was called Adolf Hitler-Platz, and now the square is a place where visual fountain shows take place. The square becomes a favourite meeting space of residents and an area for some cultural events. 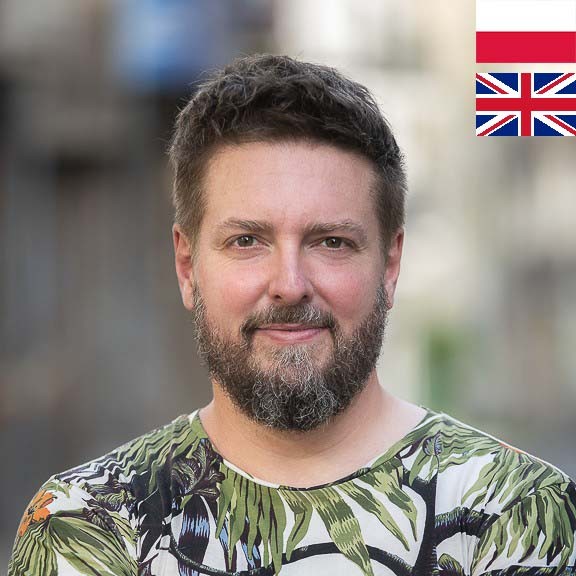 I was born in 1979 in Warsaw, but I have tied my life with Lublin. I am a graduate of the history and history of art at the Catholic University of Lublin and I earned a doctorate of history at the Nicolaus Copernicus University in Toruń. I have completed training and lectures at the University of Reykjavík in Iceland, University of Nordland in Bodø in Norway, University of Bosphorus in Istanbul in Turkey and University of the Azores in Ponta Delgada in Portugal. I am a lecturer at the Open University of KUL and the University of the Third Age in Lublin. I have written several dozen scientific and popular science articles in the field of artistic craftsmanship, numismatics and medallic art, as well as copyright in art and Scandinavian art. I have participated in many scientific conferences and received a scholarship from the Mayor of Lublin. I was an actor of Leszek Mądzik’s Art Scena KUL, thanks to which I participated in numerous theatre festivals. I also worked at the Art Gallery of the Visual Stage on the organization and arrangement of exhibitions. Travelling is my passion, so I’m often on the road. The results of my travel are meetings and photography exhibitions.

I often show tourists around Lublin as a PTTK guide. I am the originator and organizer of East est — the Festival of Eastern Travels in Lublin, where the greatest travellers, writers and artists working around the broadly understood Orient meet. I recently climbed Toubkal (4167 m above sea level) — the highest peak in North Africa. And just before the pandemic, I visited one of the farthest places from Poland — Easter Island.