What Lublin monuments talk about? Part 3

What Lublin monuments talk about? Part 3

This walk is the third part of a series of 3 walking tours that follow the route of Lublin’s monuments. However, even those who decide to walk all three routes will not see all Lublin monuments. There are about 90 of them. They commemorate events and characters, but they also have their own stories and knotty fates.

The third route will cover the city centre, towards the Castle of Lublin, Lubartowska Street, the Academic Campus of the Medical University. The participants will set off in front of the building of the National Clinical Hospital no 4 on Jaczewskiego Street. Perhaps, it will be surprising for you, that in Lublin there are two monuments of Maria Curie-Sklodowska. On the opposite side, on Jaczewskiego Street, there is a monument-tomb, controversial due to its origin, known as the “Swedish Monument”.

Then the participants will go to Biernackiego Street to see the unusual, wooden monument of priest Piotr Ściegienny. Why here? Following Sieroca Street, participants will return to Obywatelska Street, and then to Chodźki Street. There, near the dormitories of the Medical University, there is a large stone commemorating the place of execution of prisoners of the Castle of Lublin. Unfortunately, there are many such places in our city.

At the crossing of Obywatelska and Spółdzielczości Pracy Street – the monument-chapel of the Fallen Uhlans of Prince Poniatowski. A few steps further, hidden in a private garden, there is a monument to the Soldiers Fallen in the Kresy region.

Going further along Unicka Street, the participants will come to Singer Square, where the Bolesław Bierut monument once stood, and on the opposite side of the street, in Shevchenko Square, a monument dedicated to the victims of the Great Famine in Ukraine. The next will be the Mast, created on the occasion of the 100th anniversary of regaining Independence of Poland.

Further, at the foot of the Castle of Lublin, there is a monument “Symbol of Lviv”, a copy of a sculpture from the Lychakiv Cemetery. A bit further there is a Monument to the Zaporizhians. At the end of the tour, competition for the participant’s favorite monument of the tour will be organized. 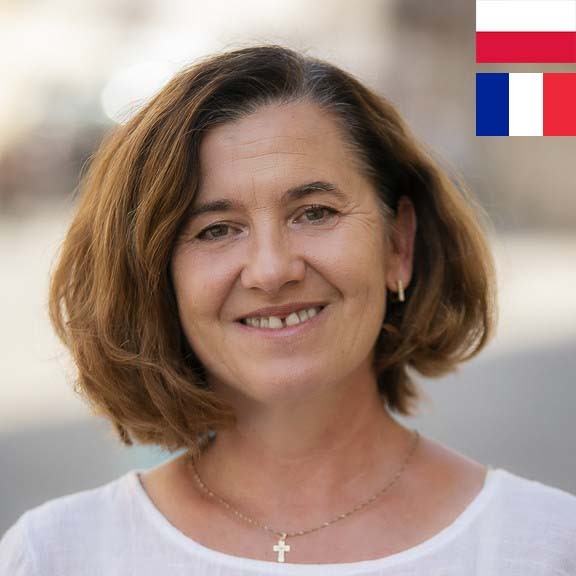 I have been a guide for 9 years. I belong to the Society of City Guides in Lublin PTTK and the Lublin Association of Pilots and Tourist Guides “Pogranicze”. I work as an academic teacher and translator.

Tours are available in Polish and French.

Contact with people of different ages, professions and from different parts of the world is what attracts me the most in being a guide. Also, I would like Lublin and the Lublin region to become recognizable both among the inhabitants of our country and guests from abroad.

People who contributed to the history of the city are the inspiration for my walks. Famous, but also nameless… they give it character, identity and build a unique atmosphere.